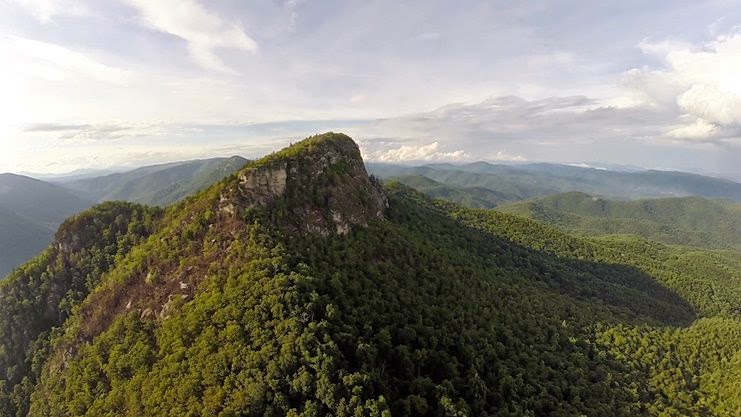 Even though I am still working on recovering from my parasite issues, I had a little confidence boost after I finished NAR.  I haven't run a race all year because of those issues, so on a whim, I signed up for the Table Rock 50 miler two weeks before the race.  I decided that since I was pretty busy with work and coaching, I would just wing this run.  In other words, I set aside my obsessive compulsive behavior and limited my preparation to throwing  a bunch of stuff in my pack and quickly reading through the website.  I gathered that it was a brand new out and back course with a lot of technical single track and climb, which was fine by me.  I paid no attention to cutoffs, aid station distances, course descriptions and figured it would all work out in the end.

Tony and I drove up the night before and stayed in Morganton.  At 4:45 am, I remembered why I don't really like organized races.  They start so darned early!  Hellgate and Grindstone have start times much more to my liking.  Anyway, I wrote down the address of the start, plugged it into the GPS, which then guided us three miles past the start.  There was supposed to a sign at the entrance, but a small sign on the opposite side of the road in the dark was easily missed.  In fact, we missed it again when we turned around and I got to the start 5 minutes before the race began. (If I had been in my OCD mode, I would have had a meltdown.)  Now to be fair, there was a gigantic billboard pointing the way to the campground, but since I did a quick read through of the directions, I wasn't really sure if that was the right place or not.

I got my bib on, dropped my drop bag and went to the start, where a small group of people were gathered.  After a few words about the pink and black flagging we were supposed to see every 3-5 minutes, the RDs sent us off in the dark.  Wayne and I decided to start off together and see how it went.

The course leaves the campground, runs through an open field and then heads onto single track in the woods.  (Let me insert a pet peeve here.  Please do not wear a flashing red light on the back of your headlamp or hat.  While that is an excellent idea if you are by yourself, it just annoys all the people running behind you in an ultra.)  Everyone was in a tight pack, moving along, when all of a sudden people began shouting and turning around. Was there a bear?  Was someone hurt?  No, we had right off the bat missed a turn. We all backtracked, found the right trail and restarted.

The aid station workers weren't quite sure how far it was to the next one, but no matter.  I got two bottles of water and had plenty of calories in my pack, so I would just get to be aid station when I got there.   The route was on gravel road, first sharply downhill, then gradually up to the next road crossing. Somewhere in the middle of this section, we took a slight detour down the wrong path, but figured it out pretty quickly.

The gravel road ends at a busy paved road, which you follow for a quarter mile or so before getting on another gravel road. This road went sharply downhill before crossing a bridge, turning right and becoming level and then up again to the next aid attain.  Wayne and I were alternating walking and running and were making good progress but then saw a group quickly catching up with us.  I told Wayne they must have gotten off course, because they were moving much much faster than the people in my part of the pack normally move. Sure enough, they had missed the turn off the road and got three or so bonus miles in. 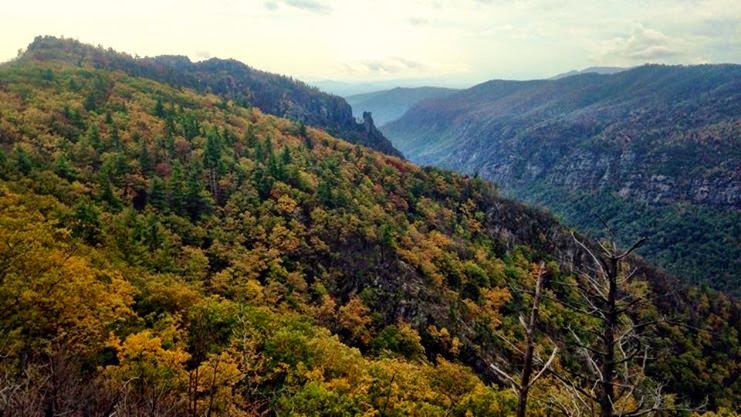 At the next aid station, I was the third female to come through which would have made me feel good, except I knew that people had missed turn and would be coming up behind us.  Anyway, Wayne and I continued our walk/run up the mountain, feeling good.  The road section eventually ends and you are back on rocky, technical single track and we moved well through that, until we got to the river crossing.  They call it a creek, but it was wide and fast moving and I don't have much confidence in my balance since the knee surgery.  I carefully picked my way across, which gave Wayne plenty of time to cool off in the water while he waited.  Back onto single track again, which started a relentlessly steep uphill climb, finally coming to a gravel road and the next aid station.  It was high up and pretty chilly, but the aid station worker assured us we would be dropping down into the woods where it would be warmer.  These were words we did not want to hear.  We knew we had to get to the top of Table Rock to the turnaround, so downhill meant even more uphill.  Not having paid too much attention to the course description, we assumed that the next aid station would be near the top of Table Rock.

We dropped down on double track, crossed a creek three times and then started down switchbacks to a gorge.  The trail became really technical and slow, but the waterfalls in the gorge were beautiful. Finally we started back up.  Really, really steeply up.  After we hit the top, we came upon an aid station, where we became really confused since we were not at the top of Table Rock.  Here we learned that the course was actually 54 miles and we still had a ways to go to the halfway point.  Four miles doesn't normally seem like a big deal, but when you are slowly crawling uphill, that's another hour added on.  We grabbed some food and ran off feeling pretty down, thinking we were almost there when in fact we weren't.  We started seeing retuning runners, mainly 50k runners.  Eventually we came out on a gravel road briefly and then started another long extremely steep climb  which thankfully ended on  Table Rock.  The views there were outstanding, but the fact that we were at 7 1/2 hours on a course with a 15 hour cutoff made for a quick look.  And we still had to make a side trip to the aid station to get to our drop bags.

On the way back, we were moving strong and passed some people.  However, when we came back to the aid station where it was so cold, we had missed the aid station cutoff.  Our options were to wait there until we got picked up or wait until the sweep caught us.  We kept going, but I have never been caught by a sweep and I while I might get pulled at the next aid station,  I was NOT going to be caught by a sweep.  (I envisioned a deep woods version of tag or hide and seek.) Again, we moved really well, passed a couple more people and hammered the downhill on the gravel road.  They didn't pull us at that aid station, nor at the next one. We finished in 15:30 and the RDs did count us as finishers.I got a great hoodie and 1st place award in my age group (because the top three women overall had been in my age group).

My overall impression of the race was good.  The RDs and volunteers were very helpful, the swag was the best I've had in a long time and I loved the course.  It was hard, technical and the creek crossings guaranteed wet feet the whole time.  But it was very pretty and had some gravel road thrown in for a bit of a break.  The aid station food was good and I wasn't left wanting anything.

The last half of the race was not as enjoyable because I was frustrated with the cutoffs and running from sweeps.  The only cutoff I have missed in 11 years has been at mile 42 at Hellgate (twice, due to snow and ice).  But at Hellgate, I knew I was moving slow.  Here I was moving well and felt really good.  I hope they will adjust the cutoffs a little or this will be a race for fast runners.  I didn't have trouble with the course markings, except at one place, but others did, so I am sure those tricky spots will be addressed.  One other thing I really needed was crew directions to the one place crew access was allowed.  Maybe they were somewhere on the website and I am sure that if I had asked, someone would have given me them, but it would have been nice to have a printout stuck in my packet.

Speaking of packets, thank-you RDs for sticking my shirt (which is now my favorite running shirt) inside the packet.  I cannot tell you how many times I have showed up to a race for which I had preregistered and  they have run out of my size or out of shirts totally.  And thank-you for the women's cut. I like shirts I can actually wear!

Final thoughts.  I will be back next year, even if they do not adjust the cutoffs.  I would come back next month if they wanted to put it on again.

Photos are from the Table Rock Ultras Facebook page.

Posted by Denise Davis at 6:28 PM No comments: