I signed up for Laurel Valley a few months ago, but as the time drew closer, I began to have second thoughts about the wisdom of running it when my ACL wasn't yet 100%.

First:  If you've ever had any knee issues, you know that stairs are not your friends.  There's A LOT of stairs at LV.  Has anyone ever counted the stairs?  There's no way to describe all the sets of stairs, their steepness, narrowness, slickness, never-endingness.  Pictures don't do them justice, but here's some from fellow LV runner, Chris Knodel: 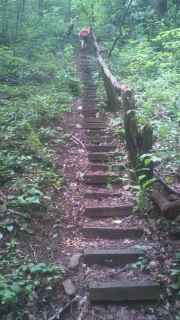 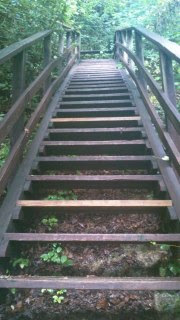 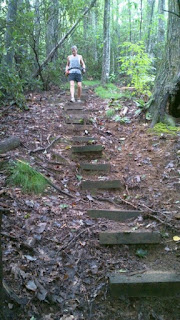 Second:  I push myself a lot at LV.  I made the mistake once of running 7:52 and so I think that I can do that again (which I haven't).  If I was stubborn and pushed it this year, I would only get frustrated with the fact that I can't run like I did a year ago (or especially the year of the 7:52).

Luckily for me, the very wise Bill Keane invited me to hang out with him as he ran with Claude Sinclair at a more enjoyable pace.  I would be going easy on the stairs and not pushing myself too hard.

But, the day did not go quite as planned.  Claude took a really bad fall and was forced to turn back, so Bill accompanied him while I was given the job of helping sweep.  That was probably the best thing that I could have done.  I relaxed and enjoyed the day, met new friends, caught up with old, stopped and looked at the scenery and generally felt terrific.  At an easier pace, I felt strong and fresh and really enjoyed being helpful, rather than just running for myself.  Instead of coming out of LV demoralized, I felt confident for the first time in over a year.

This is Emily.  I spent most of the day with her and enjoyed the experience of running with someone, rather than solo as I usually do. 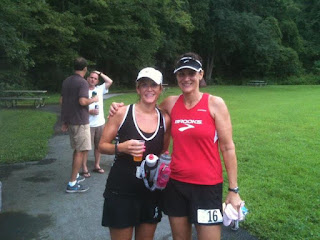 Bill came back in towards the end (with a surprise hamburger) and for the first time ever, those stairs climbing up Whitewater Falls did not seem all that bad.  Okay, they were bad. 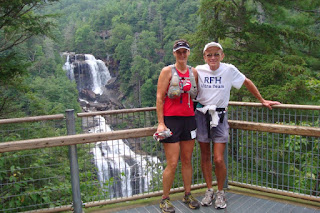 Posted by Denise Davis at 2:36 PM No comments: