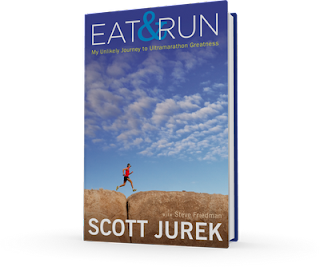 If you are reading this blog, I'm going to assume you are a runner, probably an ultrarunner, and you are familiar with Scott Jurek.  Scott Jurek is viewed by many in the ultrarunning community as a respected ambassador of the sport.  Looking at Jurek from afar, one sees a quiet, unassuming runner who has a long list of ultrarunning accomplishments, including numerous wins, course records and the American record in the 24 hour race format.  This book is the first time I recall Jurek doing some serious self-promotion, but as you read the book, you feel that rather than promoting himself, Jurek is simply sharing his story in order to pass on what he has learned.  Jurek does not come off as pretentious; he is the winner of the race who stays at the finish line to congratulate all the other runners. He said, of sitting at the Western States finish line,  "If you were an ultrarunner, you were an ultrarunner...We paid the same price and garnered the same joy. And staying at the finish line, I got to remind myself of our collective struggle, to experience that joy over and over again." Gestures like that earn you respect in the world of ultrarunning.

When I first read the title of the book, I assumed the book would focus a lot on Jurek's vegan lifestyle and a little less about his running.  I was pleasantly surprised to find that while the vegan lifestyle is the cornerstone of his running, the book was really the story of Jurek's ultrarunning career.  The book weaves together three integral parts of his ultrarunning journey: his childhood background, his vegan lifestyle and his friendship with Dusty Olsen.  Each chapter then ends with some useful running tips and a vegan recipe, striking a nice balance of autobiography and how-to advice.

In his book, Jurek credits his tough childhood for laying the foundation for his ultrarunning career.  He watched his mother, diagnosed at an early age with multiple sclerosis, slowly deteriorate, while Jurek took on added responsibilities and dealt with his authoritarian father who, understandably, had difficulty dealing with his wife's illness.  His father's phrase, "Sometimes we just do things" is a central theme in the book.  Running became an escape for Jurek and the discipline he learned from his father turned into self-discipline later.

Jurek also credits turning vegan as a game-changer for his running career.  He outlines how his overall running, energy, and recovery time improved once he cut out the animal products and figured out how to get adequate protein from other sources. He had trained hard but could not reach his goals until he changed his diet.  Jurek does not preach to the reader, but his story makes one think a little more about food choices.

Despite what he refers to as the lonely nature of our sport, Jurek describes just how tight friendships with other ultrarunners can be.  One constant in his running career was Dusty Olsen, his bad-boy, rebellious best friend, who, Jurek admitted, had more natural running talent.  Dusty got him into ultrarunning and supported him throughout, pacing and crewing him to many of his wins.  Dusty had little sympathy for any issue Jurek had during a race and constantly pushed him harder.  At Western States, as Jurek was on his knees, vomiting violently, Dusty tells him to "do that sh*t standing up.  "C'mon, let's get running."  Jurek thinks a lot about his running and how to improve it, but Dusty never gave Jurek any choice but to run and run hard.

One thing that struck me with Jurek's story is just how similar ultrarunners are, whether they are breaking course records or struggling with cut-offs.  Many times while reading, I found myself relating to Jurek's experiences.  From the drive to train to bad decision-making  to dealing with struggles in a race, Jurek shows just how alike we are.  While the book's subtitle is "My Unlikely Journey to Ultramarathon Greatness,"  from my experiences with ultrarunners and their motivations, I found nothing at all unlikely about his story.

I really don't know how non-ultrarunners will receive Eat and Run.  A book that starts off with the author puking at Badwater and watching the puke evaporate before it hit the road might not be appealing to some readers.  But I enjoyed Jurek's story of his ups and downs, his overcoming obstacles, and his rediscovery of the joy of ultrarunning.  Although at times the book left me wishing for more details, it did make me want to go out and run...and make some guacamole.

Sometime around 10 p.m. on the Black Mountain course.  (On little uphill on the section of single track in the woods after the paved section.  You know where I mean.)

Brain:  Umm, I wouldn't say we're doing great.  It took us over 12 hours to do it. And we're getting lapped by everyone, even the lap counters.  And you're limping.

Body:  Are you living back in 2010 or something?  We've been reconstructed.  Things still aren't working right.  We're wearing this flipping brace that irritates the heck out of us.

Brain:  But I wanted everything to feel good and work right.  It's been nine months.

Body:  The surgeon said we could START running again at 6-9 months.  I'm not really sure what he would think of us running a 24 hour race at this point.  But I'm giving her all she's got, captain.

Brain:  Sigh. You're right.  But I think we should stop after 50 miles.

Brain:  You're limping and I don't really see the point in continuing on just to say we did.

Body:  But you know how these runs work.  If we just keep moving, we'll stack up a lot of miles.  I can do it.  I can keep moving.  See?  We're moving now.  And I only limp some of the time.

Body: What happened to "suck it up, buttercup?"  Oh, I get it.  You're that evil twin Brain.  The one that shows up when we are really tired and can come up with 100 logical and rational reasons we should stop. You aren't fooling me.

Brain:  Look, we've had a good day.  We've seen lots of people we haven't seen in a long time and we've had fun.  Quit arguing.  We're going to try something new and stop BEFORE we are miserable.

Brain got the last word, because Body went into flight or fight mode as a gigantic, screaming, squealing, high speed train suddenly came barreling through the woods, twenty feet from the trail, throwing sparks and sounding like at any moment it was going to derail and kill us all.  By the time the adrenaline subsided and Body knew what it was doing, Brain had checked out with the lap counter.

52.7 miles in 14:01, run in memory of Angela Ivory.  For some reason I heard footsteps behind me all day.  It was making me crazy turning around looking and finding no one there trying to pass me.  Although it was probably something I was wearing, I would like to think it was Angela out there, enjoying an ultra one more time.


Posted by Denise Davis at 1:19 PM No comments: