Did You Hear the Pop? 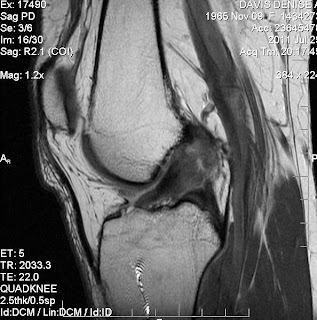 It was a pretty normal plan. To give the girls a break from running during Cross Country practice, on July 11th at 3:30 pm, I decided we would play Ultimate Frisbee. I went down on the second play of the game, catching the frisbee in the end zone. Except I hit a little hole and I went down on my knees. Ouch, that twanged something. I stretched it out some, limped along, and tried to keep playing, but my knee wasn't supporting me when I tried to lean out or jump. After I got everyone home, I went home and began the RICE protocol. The knee was swollen and although I tried to tell Tony I just "twanged" something, he was sure I had done more than "twanged" it. I RICE'ed all week, then went to a weeklong workshop in NJ/NY, where I did a lot of walking on it, but wore a knee brace. By the end of the week I was walking fairly normally, but could not run. I emailed the RD of Running with the Devil to withdraw from the race that Saturday.

When I got back, I reluctantly went to the doctor, who ordered X-rays and an MRI. "Surely I would know if something was really wrong, wouldn't I? Do I really need X-rays and an MRI?", I asked. She got a really good laugh out of that one. For some reason, she thinks I have a really high pain tolerance and, no, I wouldn't know if anything was really wrong. So off to X-rays, first. All clear there. Then off to MRI. The doctor called a couple days later. "I have bad news," she said. "You completely tore your ACL and partially tore your meniscus." After I hung up, I called her right back, because neither of us had thought it was the ACL. "Are you sure? Did you read it?" She was sure. A visit to the surgeon confirmed it. "Did you hear the pop?" he asked. No, I didn't hear a stinkin' pop. After thousands of miles of trail running, my knee goes out playing frisbee. And apparently, the ACL is the worst of the knee injuries. Six to nine months of no running after surgery.

I was actually running a little on it before I found out it was the ACL and before both the surgeon and physical therapist showed me how they were able to move my knee around in ways that it's not supposed to move. I've been fitted for a brace and the surgeon said I could run my upcoming races in it, if it didn't wear my skin off and I could choose when to have the surgery. But he said no trail running. And the longer I put off surgery, the longer it is before I can run again, and the longer I walk around a unhappy camper. I know, it could be a whole lot worse. And I'm sure it happened for some reason. But that doesn't make it any easier to lose doing something I love.

So, I've done the math and although I'll miss my favorite time of year to run in the woods, fall and winter, I should be able to hit the trail in spring again. And maybe by then, I'll actually have pretty feet with all ten toenails for the first time in eight years.