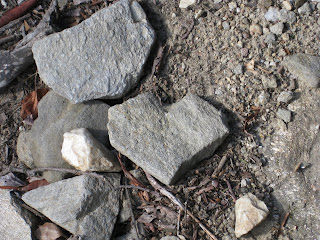 There's nothing like keeping a tradition alive. Three years ago, Alan and I decided to run Adam Hill's Rattle My Heart 50K Fun Run. I was sure I knew where Lake Susan was, but after an hour of driving to all the lakes I was familiar with (not a one of the Lake Susan), we finally gave up and ran elsewhere.

The next year I asked for directions and we made it to the start with no problems. However, once into the Ridgecrest property, we were unclear about where to go and so had a very nice tour of their facility before figuring things out.

This year, coming off of two months of relative inactivity, I was a bit slow climbing up Rainbow Mountain and I quickly lost the rest of the group. No problem. I pulled out Adam's handy-dandy set of instructions and carefully followed them. Except that for some reason I thought I "knew" Rainbow Road was an actual road and not just a double-track trail. To make a long story short, I made a lefty instead of a righty on Rainbow Road , thinking I was somewhere else, and after running downhill for awhile looking for Rainbow Road, I realized my error and reversed course. However, after consulting with someone out for a run, I ended up taking yet a different trail, another meandering scenic tour, eventually ending up at the spot where I made the wrong turn. Bonus miles are great.

(Side note: although I may seem to get lost a lot at this run, I have not yet ...knock on wood... ever been truly lost. I may not know how to get to my destination, but I always know how to get back to the car. )

The tour de Ridgecrest a couple of years ago paid off as I shortcutted Lookout Mountain and made up a few minutes, but I was content to be the caboose for the day. The rest of the run was splendid. The weather was great and my IT band felt fine. I pounded the downhills hard, testing out my legs and everything was in fine working order. I felt like some sections went by a lot faster than the last time I ran, although I had forgotten how LONG Heartbreak Ridge is. (I also feel bad for all those people who drive for miles to find Andrew's Geyser, which is not a North Carolina Old Faithful, but a man-made fountain that does have some historic significance. Apparently it was originally built nearby in the late 1800s in front of a hotel to memorialize the 120 men killed building the railroad through the area. It was later moved and restored.)