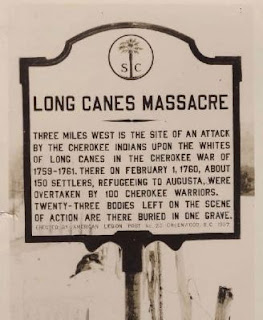 “How long can a 50 miler take?” was Tony’s text message to me when he had not heard from me when he expected to. Unfortunately, today it was 12 hours and 32 minutes, MUCH slower than any of my Masochist times. How could that be? It turns out that Horton miles are nothing compared to Hayes miles.

Long Cane is the fourth race in Terri Hayes’ South Carolina Ultra series. Terri has bucked the trend of high priced races with tight cutoffs and time limits. She does not charge anything for her races, but accepts donations instead. You don’t get a t-shirt, but you do get a unique handmade finisher’s award. Her races are extremely well organized and have better aid than many races I have run. You don’t feel any pressure in her races and you know that no matter how long it takes you, Terri is not going to pull you off the course. In addition, Terri manages to find interesting places to run and I feel like I have been on a Tour de South Carolina this year.

I drove down the morning of the race to Parson’s Mountain Recreation Area south of Abbeville, South Carolina, about 2 hours and 45 minutes from home. I was glad I had TomTom, as the trip required a lot of turns in order to arrive right smack in the middle of nowhere. Okay, maybe not as far in the middle of nowhere as Woods Ferry, but pretty far out.

After checking in and picking up a race packet (you get free stuff despite not paying an entry fee), Terri explained the course. You would run the trails first in a figure 8 pattern and then run the outer loop back to the finish. It made sense when you saw the map. After the race briefing, Terri simply said “go” and off we went.

The trail is a meandering single-track multi-use trail (mountain bikes and horses), but is in good shape. Unlike Woods Ferry, the trail was generally non-technical and flat. Okay, it rolled some, but the hills were so short that I felt compelled to run them all for the first three hours. Soon I realized that that strategy would not work for me. I am not very speedy on flat terrain and I usually rely on steep descents to make up time that I lose on uphills. I have no clue how to run when everything is so runnable. I don’t know how to actually pace myself, since the mountains usually dictate what pace I go.

As the day wore on, I began taking walk breaks on the hills and taking it easy in the hot sun. The weather was great for the first three hours, very fall-like, but the temperatures climbed quickly once mid-day arrived. The humidity stayed low, but it was still hot. I was also having trouble with my asthma. I got to one aid station and found that I had almost lost my voice. The culprit was the dust. It was very dry and you could see the dust hanging in the air. Once I figured that out, I tried to stay away from other runners and my breathing improved some.

Howver, about halfway through I became very concerned about my time. At aid station 5, they said it was four miles or so to the next aid station, the turn around point. I didn’t pay too much attention to the time, but it looked like I was running twenty minute miles on a section where I didn’t take too many walk breaks. It turns out that there were a couple of extra Hayes miles on that section, and when the race was over, runners’ GPS’s read that it was a 57 mile course. It was not Terri’s fault that it was so much longer, she was simply going off what the Forest Service map said the distance was. A lot of runners opted to stop at the thirty mile mark rather than continuing on. Thirty-two of the original 62 runners finished the 55 mile (as Terri is calling it) and others finished at distances ranging from 50K to 50 mile.

As I realized how long it was taking me, I began to get a bit frustrated with myself. Luckily, towards the end of the race, I ended up running with other people who took my mind off the time of day. I ran a section with Andrew, who was battling an IT band injury, and another with Orran, who had missed a turn and was going to end up short of 50 miles. One gentleman had lost toenails and was bandaging them up at an aid station when I came through. A few minutes later, he came sprinting past me, hollering like a banshee.

Although it made me feel a bit better about my slow time, I realize that I either need to stick to the mountains or figure out a way to train on flat ground. I jokingly complained to Terri about her flat course, but judging from how sore my legs are two days later, I apparently got an excellent workout using my muscles in a way they aren’t used to.

Despite my dislike of flat, hot places, I will go to more of Terri’s races because she does such a nice job of directing these runs. Hopefully she will continue to get enough donations to continue to do this.