Finally 50 miles, How I Fixed my IT Band and other Randomness

If you haven't heard me complain about it, I injured my IT Band during my Bartram run in November. After my run, the cold I was battling hit full force and I was out of it for about a week. I didn't run for another week and I assumed that after two weeks of rest, my IT Band would be good to go. I had never injured my IT Band before and had no clue what to do about it or how long the recovery would be. After 5 minutes of running, I realized that rest alone hadn't fixed it.

So on to the wealth of information on the internet about how to fix my IT Band. Actually it was way too much information and much of it conflicted. One site hooked you with some seemingly excellent advice, only to stop partway through it and ask you to order the book if you wanted to learn the rest of it. Grrr.

My first plan of attack came from the "don't stretch it, you'll make it worse" camp. I did use the foam roller (OUCH!!!) every day and slowly built up the time I was running. I also used the advice of one of my former runners and used pre-wrap to wrap the area above my knee tightly. I was able to run 30 minutes, then an hour, then about 1:45, where I hit the wall. I was following the advice to stop running when it started hurting, so I did. But I couldn't get much beyond the two hour mark without having to stop. That sounds perfectly reasonable for the perfectly reasonable runner, but unfortunately I don't fall into that category. Two hours is the warm-up to the warm-up.

So I reversed course and this is what finally worked for me. I thought I would post it since I found so much confusing and conflicting advice. I realize that what worked for me won't work for everyone, but at least it's something to try.

2. A deep tissue massage daily from my unqualified husband. He may not be trained but he has strong hands and found knots which he very unsympathetically broke up. Unsympathetically because it literally made me cry. Loudly.

3. Ice and ibuprofen after the massage.

5. Hip strengthening with a resistance band, daily, while I brushed my teeth.

6. Stopping 10-15 minutes into a run and stretching. Stopping to stretch several times during a long run. Stretch immediately thereafter.

7. Building up the length of my long runs slowly and not pushing the pace.

Finally, the week before last, a long run of 50 miles, and no ITB pain!

So there you have it. How I fixed my ITB. I'm going to keep up the stretching, rolling and strengthening because although rest is good for you, it's not all that fun when it's not optional!

You can stop reading at this point if you were just looking for ITB info!

Now for the rest of my story. That week was a fun week, running-wise. First, a nice little surprise when I got my Ultrarunning magazine in their Year in Review Section: 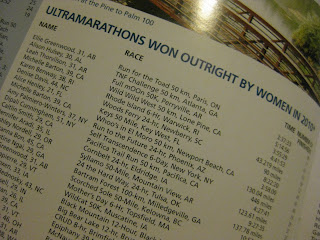 (And I found the women's data interesting. When I ran OD100 in 2006(?) my time of 23:34(?) made it into the top 100 hundred mile times for women, somewhere around 60, I think. Anyway, the sport has progressed so much in the last few years, that that time would not have come anywhere close to being in the top 100this year!)

Secondly, I did a 32 mile run on Sunday, thinking I was not pushing very hard, but ended up with my best time on that route. The next nice surprise was my 50 mile run, six days later. I had some breathing issues, some nausea issues and some random aches and pains, but they all came and went. I finished around 12:15, and was happy with that since most of it was trail and I was not pushing at all. It was also the tail-end of my only 100 mile week. Now I can finally focus on going harder and faster since my ITB seems to really be in working order.

In the middle of my run, I was coming down an obscure trail, rarely used, on which I have never seen another person. Ahead, I saw someone in a bright yellow shirt, looking at a map. (Not a hallucination this time). When he turned, I recognized the familiar triangle of Umstead on his shirt. Not only had I found someone on this trail, but I found a very accomplished ultrarunner, Jim Sullivan, tapering for Umstead. He was great company for several miles and it was nice to talk ultras with someone who really knew what he was talking about.

Alan joined me for the last 25 miles, his longest run since Bartram. No projectile vomiting for him at mile 22 like usual. I must not have been running hard enough. : )
Posted by Denise Davis at 5:37 PM 3 comments: