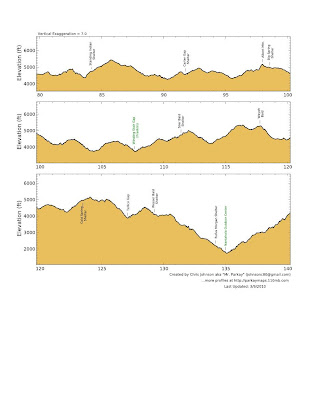 What: A self-supported 100 mile adventure run traversing the Nantahala Mountains. It will be a 50 mile out and back on the Appalachian Trail with a VERY rough approximation of 18,000 feet in elevation gain.
Where: Start on the Appalachian Trail at the Nantahala Outdoor Center and head south to Deep Gap in Standing Indian and then back.
When: I plan to start Saturday July 10th 6am and to finish sometime Sunday July 11th, hopefully by 6pm. Alan Buckner is running the last 50 with me, starting at Deep Gap.
How: This is a self-supported unofficial 100 mile adventure run. The only aid/crew/rescue that will be available will be what you provide for yourself.
Options: 50 mile run, either having someone pick you up at either end or doing a key swap with someone who wants to go the opposite direction. Or you could run to Winding Stairs and back.
Rough Course description:

Mile 0: leave NOC, start long steep climb to the top of Tellico Bald (approximately 10 miles of climbing)
Mile 8: forest road crossing at Tellico Gap
Mile 10: reach Tellico Bald, short side trail to view, start downhill
Mile 14: Burningtown Gap (trivia: I live near the bottom to the left). Trail is fairly rolling until a steep climb to Wayah Bald
Mile : reach Wayah Bald, observation tower closed, but view still great. Road access. Start rocky section of trail, rolling and then downhill
Mile : road crossing
Mile : road crossing at Wayah Gap. Start climb up Siler’s Bald
Mile 23: reach Siler’s Bald. Steep climb to the right to the top, great view. Start downhill to Winding Stairs Gap
Mile 27: road crossing at Winding Stairs Gap (trivia: my xc team does the Silers Bald challenge yearly. If they make it from here to Siler’s Bald in under an hour, they get a t-shirt) Start uphill, then downhill, including steep rocky section.
Mile 30: road crossing at Wallace Gap, trail rolling
Mile 31: road access at Rock gap shelter, start long climb to Albert Mountain ( with short downhill section in the middle).
Mile 37: Albert Mountain Fire tower. Side trail to the right head to parking lot. Start exceptionally steep, rocky descent.
Mile: Road crossing at Mooney Gap. Next several miles are fairly rolling.
Mile 43: Carter Gap shelter
Mile : Beech Gap, start climb up Standing Indian.
Mile : Standing Indian, side trail to left to view. Start descent.
Mile 51: reach Deep gap
On the way back, for safety reasons, the course will avoid Albert Mountain and the rocky approach to Wayah Bald. The run will still be 100+ miles.
Albert Mountain by-pass: At Mooney Gap, turn left on the gravel road. Bear right at the intersection to climb to Albert Mountain. At the parking lot, take the trail to the right. There is another short side trail about 1/4 mile to the left that takes you to the AT. Turn left on the AT. (If you miss this last turn, the trail still intersects with the AT).
Wayah Bald approach bypass: After crossing Wayah Gap, you will interesect with a gravel forest road in about a mile. Turn right and this takes you to the tower. Find the trail behind the tower.

Black Mountain Monster 24 hour: It is what it is 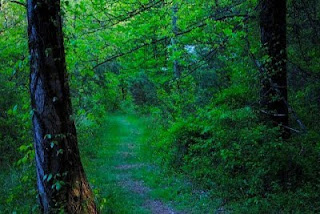 This past weekend, instead of traveling to Old Dominion, I stayed close to home and ran the Black Mountain Monster 24 hour race, the successor of the Run For Africa and Blue Planet races. I was bummed at missing OD, as it is a special race for me. When I first met Tony, he lived in Woodstock and we worked the Mudhole Gap aid station. Running OD is like going to a reunion, seeing a lot of old friends and familiar faces.

I rode to the BMM with Sarah Lowell (training for WS) and Katharine Brown (pacing at WS). After I hauled all my gear, tent, etc., down steep stairs to the field, I found a lot of familiar faces here as well. This included Brian Bedhun, who had made a pact with me in the wee hours of Blue Planet that we wouldn't run around in silly circles again. Here we are, running around in silly circles.

The race started at 10 a.m. and it was already hot and humid. The high would reach 86 degrees and the humidity did not abate through the night. I'm not sure how many started, but the numbers were lower than the previous races, especially among the relay runners. As the day and the heat wore on, many runners cut their race short and at times, I felt like there were only a couple of other people on the course.

The course was 100m short of 3 miles. I never got bored on this course, as every quarter mile or so, it changed. Double track to single track, grass to dirt to gravel to wood chips to pavement, fields to woods, etc. It was fairly flat for the mountains, just some rolling hills. The longest uphill was not much more than 100 yards long. There were lots of twists and turns and if you didn't pay attention, you were on the wrong part of the course.

After putting in a lot of training this spring, I felt like I could hit 100 plus miles. I was worried about the flatness, though, as I do much better on steep terrain and do not have a lot of flat areas to train on.

As always, lap 1 was a little fast, but I adjusted and decided where I would take walk breaks. After a couple of laps, I was able to run at a steady, consistent pace for the rest of the day. For the sake of full disclosure, though, I think I missed a turn as one lap was two minutes faster and I don't remember running through "Poison Ivy Patch." But I often zone out, so I'm still not sure. Anyway, I felt good all day, despite running in the the oven and I was pleased that I could put out even splits.

Then after 11 hours in, I began to have stomach issues. I tried adjusting my pace, what I was eating and drinking, but it never passed. Tony came to run the 12 hour night shift race and I did do 5 or 6 laps with him, but ended up walking the last two. Finally I stopped. Nothing I did seemed to work, and in the back of my mind was Blue Planet, where I pushed through nausea until at the end I couldn't walk to the bathroom. I have had stomach issues up until about two years ago when I figured out that the culprit was too much caffiene and sugar. With the exception of Blue Planet, though, the issues were usually post-race and did not interfere with my run. So I don't know what happened. I was having fun. I wasn't bored, I had plenty of energy and I was ahead in laps and on track for 100. I have thought about it and analyzed it for a couple days, but I finally just decided, it is what it is.

I came looking for the 100, but ended up with 72. It was enjoyable and I got to talk to a lot of people I have not seen in awhile. I got in a good 72 mile training run. Training for what, though?
Who knows, but I definately want to do more adventure runs this summer.

I would recommend this race. It is the first 24 hour I did not get bored at, and the race director and volunteers were all friendly and helpful and open to suggestions. Apparently I was not the only one who missed a turn, as the race director quickly ran out and put up some additional signage and markers early in the race. It was well marked at nighttime and they repainted some of the arrows that had been worn away during the day. There was aid halfway through the loops (water, Gatorade and fruit), as well as at the start/finish and porta-potties at both places. It wasn't the typical mega-choice ultra spread, but everyone had brought their own stuff anyway and pizza was delivered early in the evening.

I left at 4 a.m. and do not know the results, but was impressed with Annette Bednosky's 60 plus miles in the 12 hour and especially Anne Lundblad's 40 plus miles, which she walked in the 12 hours after having back surgery a few weeks ago. http://www.raceforawesomeness.com/?p=60
Posted by Denise Davis at 8:09 AM 2 comments: