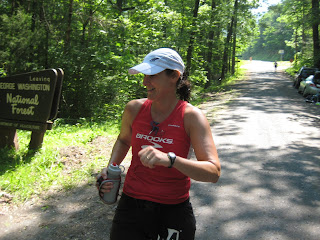 As the days drew closer to race day, I watched the predicted temperature for race day continue to climb, from the high 80’s to the high 90’s. I haven’t had much heat to train in, so I tried to acclimate myself in various ways. I sat in the sauna at the gym, tried to run in the hottest part of the day and rode around in the car with the windows up and the heat on. On Friday, the weather service issued a heat warning and predicted a heat index of 110 degrees, in addition to a bad air quality warning. I knew that this would be a whole different challenge for me, as I looked back at past results from the OD in hot years and saw the low finishing rates. This was not the day for setting PR’s and buckling again. I just wanted to be one of the survivors.

As the race started at 4:00 a.m., it was already hot and dripping with humidity. Several people had a strategy to go out fast and try to bank miles before the hottest part of the day, but I opted for a moderate start. I would run fairly hard, but I didn’t want to already be tired when the heat did hit. Any strategy was a gamble. By mile 19, the sun was up and hot and much of the course between there and mile 32 was open, exposed country roads. A lot of it is flat and very runnable, but as soon as my heart rate started climbing, I walked. I had to keep reminding myself to run my own race as people passed me.

When I got to mile 32, I was about 20 minutes behind my usual time and the heat was hitting full force. The official temperature was 97 degrees in Woodstock, but I was told it hit 100. I was dripping wet from the humidity and sweat. Tony was there with iced washcloths, ice in a bandana, and a water bottle to spray me with. I don’t think I could have made it through the race without him. I changed shoes and socks and headed back out. The next section involved a long uphill climb on trail through an area that had been burned a couple of years ago. The trees were dead, so there was no shade, and the underbrush had grown up enough to hold in the heat and keep the slight breeze from hitting most of your body. The heat took a lot out of me on that section and I could feel blisters starting to form on the balls of my feet. I lost a lot of time, but began to pass people who were hurting pretty badly.

The heat stayed very bad until around mile 60 or so. But then a rainstorm had came through, which didn’t cool things off but raised the humidity back up again. By mile 64, a lot of people had dropped out with heat-related problems (stomach issues, blisters, fatigue). I continued on, way behind my past times, and saw no one else until mile 75. By then, my blisters were pretty bad and the downhills were getting hard to run. I made a big mistake at Elizabeth Furnace and didn’t pick up my drop bag before I left, so I ran short of food on the next four-hour section and my energy level dropped. Ralph had agreed to safety run through Sherman and Veach gaps with me, but I don’t think he knew it would be an almost five hour trip. I was crawling the uphills and the downhills hurt too bad to run hard. I saw Tony one last time at Veach at 4:00 a.m., and then tried hard to cover the last half-marathon in four hours. It sounds ridiculous to think that it could take four hours to run 13 miles, but I wasn’t sure I could do it as bad as my feet hurt. I still had to climb back up Woodstock Tower and then pound down the other side.

To end this story quickly, I finished in 27:42, walking much of the last four miles. I was 21st out of the 22 who did finish the race and the 2nd female out of only three who finished. A lot of very talented, strong runners were taken out of the race by the heat, so I feel fortunate I had the help I needed to get through the race. Tony was essential, having a safety runner kept me moving on the hardest section and I prayed a lot in the last 13 miles! This race this year was as tough for me as the Massanutten was and the aftermath of the run was not pretty. My feet looked awful, not only from the blisters and a couple of toenails ready to come off, but they had stayed wet for 28 hours, despite changing shoes and socks a couple of times. Every place on my body where a piece of clothing, a seam, or my pack touched me was rubbed raw. I look like I have been whipped and I feel like it too! My legs haven’t been this sore after a race in a very long time. The extra four hours of being out on the course probably didn't help either.

The race personnel, aid station workers, and everyone I came in contact with were so helpful and encouraging. I was glad to see more runners at the race than in the past couple of years.
Posted by Denise Davis at 8:49 AM 3 comments: