Eight Weeks Later: Out in the Woods Again 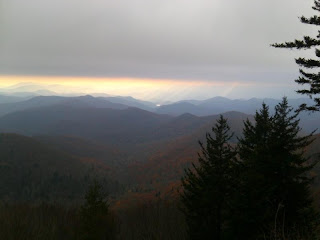 One thing I will miss this winter is running in the snow. I love being blessed with the ability to run far enough to get to places where the only other footprints belong to the bears, bobcats, deer and turkeys. There is something special and magical about being in a place like that. One sunny October afternoon, I ran up Fisher Creek, a regular training run for me. There was no snow down low, but there was more and more fresh snow on the ground as I climbed. That's nothing unusual, but this was October, which meant that the leaves were still brilliant. A brisk wind had followed the snow and the pure white ground was littered with vivid red, yellow and orange leaves. It was one of the most beautiful things I have seen and I was lucky enough to be the only person out there. People sometimes criticize trail runners for not slowing down to see the beauty of things, but I have seen many more beautiful things running long than I ever did hiking.

Having said that, this October I have been blessed with the ability to hike. When Tony took me for my first short walk on trail, I was so happy to be back out in the woods, I actually cried a little. I started walking on the forest road near my house, enjoying the woods and becoming more comfortable with with my knee. Last weekend, Tony took me for a two-hour hike on the Bartram at Sawmill Gap. The trail is not easy, but I carefully picked my way along, being so glad that seven weeks after surgery I was out there. This weekend we went to the Bartram at Buckeye Branch for another hike a little over two hours, with both my physical therapist's and surgeon's blessings. I just have to be careful of steep transitions and doing things like jumping from rock to rock.

If I had known before I had my surgery how well things would progress, I would have not been quite so devastated. Now I am able to hike, bike on the road, swim and run in the deep end of the pool. This month, my quad strength increased 88% and is 75% as strong as the uninjured leg. I have full extension and can bend it 140 degrees. I am now doing balance activities (including squats on a unstable platform), leg presses, wall squats and calf raises. I am just not allowed to run, but I was a hiker before I was a runner and right now that is just fine with me.

Everyone said that I would come out of this experience a better runner and now I actually believe it. I am doing all the things that I never had time for when I was running: weights, stretching and cross-training. I have started to think of this as the "off-season" rather than being on injured reserve. My physical therapist said, yes, I could do a 100 in June. And that's really not all that far away.

The pic is from the Blue Ridge Parkway last week.
Posted by Denise Davis at 4:45 PM 3 comments: