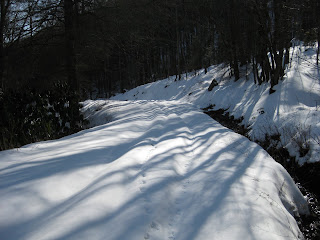 Three years ago, Sarah Lowell called me and asked me if I wanted to go run around in the mountains in the cold and snow for 100 miles or so. For some reason I agreed (although it would be nice to have a friend who calls and asks me if I want to head to the Bahamas or something) and thus the very informal Nantahala Fria Running Festival was born. Just a few local runners have participated, but this year, Sarah decided to invite more people to enjoy our “backyard,” the Southern Nantahala Mountains. By the day of the run, however, over ¾ of the runners who wanted to come cancelled (wisely) due to the weather and course conditions. Sarah had already altered the course away from the more remote and technical areas, but runners would still be dealing with 4” to 3 feet of snow along the way.

Only two of us planned to do the 100 and we each started at different times on Friday. The other runners would run on Saturday. I waited until the early afternoon to start because it was in the 30s with high winds and the winds were SUPPOSED to die down by 3pm or so. 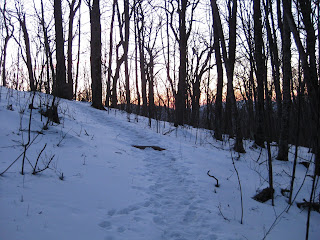 , but not horrible and I got pretty warm on the initial 5 mile climb. The first section of trail was very snowy, 6-8” on average, but runnable. Once I intersected with the AT, there were actually a few bare spots in the trail, but soon it was back to all snow and ice. The problem with the snow this year is that the temperatures have been near or below freezing for a good part of the winter up there and it is actually ice that just looks like snow. Once I hit the couple of miles of AT that run along the ridgeline (at 5,000’), it was very difficult to run or even walk on the trail. Many hikers had sunk 6” or so into the foot of snow and their footprints had frozen solid. I couldn’t find a flat place to step, my ankles rolled constantly and I was frequently knocked off balance. It was worse than the worst sections of the Massanutten.

Once I got off the AT, it was all closed forest service road back to the start. But the first couple of miles were still all high elevation, exposed to wind, with deep snow (this is where the 3” drifts were). It was very slow going until the road dropped in elevation and the wind died down.

As I said, Loop #1 was nice. Alan Buckner came to run with me on Loop #2, since that started the night portion. Loop #2 was not too bad, but the high elevation section was getting downright cold. By the time we got back to start Loop #3, it was 24 degrees at the lowest elevation. As we headed up in elevation, I put on another shell (I already had 3 shirts and a shell on) and was toasty…for about 15 minutes. After I won the bet with Alan for correctly predicting at what point he would start projectile vomiting (always about 20 miles into a run), it got VERY cold. It was easily in the lower teens or single digits 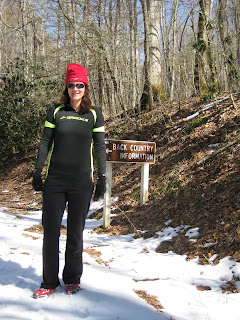 up top. And the wind was literally roaring at this point. On the road sections, as we tried to pick our way through the deep snow, the wind was knocking us around. The water in my water bottle first turned to slush, then ice. We couldn’t get the lid off until I put it under my jacket for a couple of miles. Then when we did get it off, I had to use a rock to chip away the solid sheet of ice that was in the lid, blocking the valve. And after already being cold and then putting a bottle of ice up against me, I couldn’t get warm. As the road dropped in elevation, it did not warm up like in previous loops and the wind continued to roar.

When we got back to the start/finish area, Alan decided he didn’t have the energy to go another round. I felt fine, but was very cold. Then I had one of those moments that my husband is proud of me for having (because they don’t come often). I actually used common sense. The run had become way too dangerous with the weather and the snow. There were no aid stations to get help at and only one other runner out on the course. Help would be a couple of hours away, way too long in those conditions. And my greatest fear is becoming one of those hiker/runners that they have to rescue. (As a teacher and coach, I would never hear the end of THAT from my students). So I decided to stop. Prince, the other 100 mile runner, also stopped when he came in on his next loop.

BTW, those are Kahtoolas on my Brooks Ravennas. They are microspikes that are so much better than Yaktrax or screws.

The Nantahala Fria blog is at http://www.nantahalafria.blogspot.com/. I posted a course description and condition report there the week before the run.