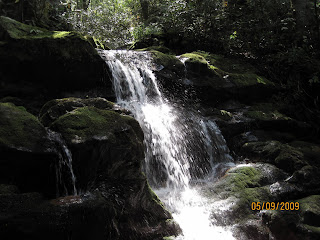 After seven years of running ultras, I have finally gotten smart, according to my husband.

Earlier this year, running became drudgery. I felt like I HAD to log a certain number of miles a week and do certain workouts, because I just had to get better or at least run at a decent level. Because I work in a germ factory (aka public high school), I was sick off and on all winter and spring. I would get a good two or three weeks of training in and then I would be knocked back for a week or two.

I was sick over Christmas vacation and then did the Tsali Frosty Foot 50K in early January. I got sick, recovered, trained, got sick again, repeatedly. I did SCAR and was down for another three weeks. I cancelled Massanutten and then remained healthy enough to do Old Dominion. Unfortunately, due to a variety of circumstances (wrong shoe choice, wet, muddy conditions), I DNF’d around mile 60, after losing my quads for the first time ever. I kicked myself around for a bit after that and then started running again.

Then I read Born to Run. Besides being a good read, it reminded me of why I started running. It was fun. And somewhere along the line, it became not fun anymore. I decided that it was time to rethink what I was doing and why.

My training changed dramatically. Some days I didn’t run at all if I didn’t feel like it. I ran in places and on trails I liked. I went on vacation and spent time hanging out with my husband rather than feeling like I had to get up early and get a run in.

Around about July, after realizing that I finished a race since January, I signed up for Lansford Canal 50K. This went against all my newfound wisdom. It was South Carolina in July (I hate heat). It was flat (I like my mountains). A lot of it was on pavement (ugh). And it went in circles. Despite all of that, it WAS fun. I had no expectations set for myself, so I was relaxed and I just ran. When I started having stomach issues, instead of pushing through them (and making them worse), I slowed down and even walked some. I still had plenty of energy left and ended up setting my 50K PR there. (Plus got the Team Slug t-shirt I’ve coveted for years).

Laurel Valley this year was one of my slowest. I will admit that it was not much fun because I pushed myself hard to try to PR and of course that backfired. It was particularly hot and the most enjoyable part was sitting in the middle of a creek. Next year, I am going to just relax and have fun.

I spent a few weeks trying to decide between Iron Mountain 50 mile and Hinson Lake, two weeks later. Iron Mountain would be my type of run- single track with lots of elevation gain, but I had been told by many people that Hinson Lake was a lot of fun. I could not picture how it could possibly be fun running around in a 1.54 mile circle. The Black Mountain 24 hour races were bad enough, a 5 mile circle, but at least they were mainly on trail with some good climbs and descents. But finally, I decided to do both.

Iron Mountain was a lot of fun. Not many people had signed up and they missed out on a great race. The race director and volunteers were great, there were lots of goodies, excellent aid stations and the course was wonderfully challenging. LOTS of climbing, good gnarly single-track, some gravel road to make up time on and just a pleasant run through the Virginia mountains. I didn’t burn up the course, but I finished strong and enjoyed myself.

I knew deep down that I really didn’t want to do Hinson Lake. But I looked at the list of entrants and I knew so many of them that I figured I must be missing out on something. On top of that, two friends from Franklin were traveling over, one to complete her first ultra and the other to qualify for WS

My first sign that I shouldn’t go was the torrential downpour I had to load up our vehicle in and then the two hour later than desired start towards Hinson Lake. I ended up with about six hours sleep and then when we got to the lake, we had brought a canopy tent, but had left the canopy top behind. So we had an interesting open metal structure until Tony procured a tarp for the top.

The run was actually pretty fun, for the most part. I ran and talked to a number of other runners that I had not seen for awhile. Bill Keane gave me a digital lap counter to keep track of my progress. ( A copper ring that you moved from one of your digits to the next). I ran a few laps with Sarah Lowell, a fellow Franklin teacher, and got to celebrate with Katharine Brown, another Franklin teacher, as she completed her first ultra (40 plus miles).

However, running in circles on a flat sandy surface was not my thing, especially as the crowds thinned out after dark. Tony ran with me for seven laps, which is the first time he has run any distance with me in a very long time. I really enjoyed his company and when it came time for him to head back to the hotel, I decided to keep enjoying his company. I was running pretty slow and I would really have to push it to hit a 100 miles and I didn’t see the point in being miserable all night. It wasn’t like I had never run 100 miles in less than 24 hours. I began to think again why I run. I run for fun. Stopping at 15 hours with 100K plus would preserve that fun factor and I went back to the hotel with no regrets. As a bonus, I only slipped one place in the women’s race (from 6th to 7th) while I slept.

The race director and volunteers at Hinson Lake were incredibly nice and helpful. The food was plentiful and every 1.54 miles I was met with a lot of cheerful faces. If you are into the running in circles thing, or if you are trying for a certain distance in a certain time, you can’t go wrong with this race. I felt guilty for only paying $24 and getting all that aid, a quality venue, plus a t-shirt and a mug.

Now I just need to plan what I am actually going to do that is fun. SCAR in October sounds good…
Posted by Denise Davis at 5:47 AM No comments: