Fun News (and a Setback)

If you haven't already read about Liz and Scott's record setting quest, check this out
http://run30hundreds.blogspot.com/

If anyone can do it, they can. Here they are gearing up to help me finish the Bartram. 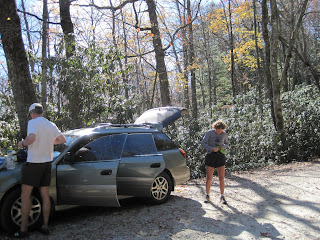 As for me, no more running per the surgeon for at least two months. PT thinks my muscles are strong enough to support the knee, so I've been running for about three weeks, but the surgeon says it's too early. I was enjoying the idea of getting back into it so soon, but becoming a stronger, faster hiker will pay off. Still, disappointed.
Posted by Denise Davis at 6:00 PM No comments: 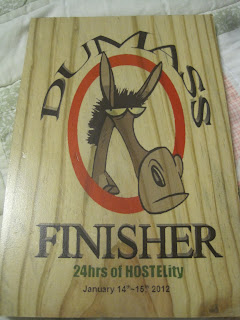 "Please don't be my second story," is what my surgeon told me the last time I saw him, referring to the fact that he has only had one patient retear his ACL after surgery, doing something he shouldn't have been doing.

I had picked the Dumass 12/24 Hours of Hostelity to be my first ultra "hike" with my physical therapist's blessing. It sounded pretty tame. It was a little .65 mile double and single track trail with only 100 feet of elevation gain that passed through the back porch of the Dahlonega Hiker Hostel every loop. So Tony and I headed down to the North Georgia mountains, where I discovered that 100 feet of elevation gain can feel pretty significant when you walk 46 loops. And I want a second opinion on that 100 foot number.

The morning started off good. The Hostel was an ideal venue for the race. Racers had the luxury of using the downstairs area throughout the run as a place to get out of the cold or rest or stash their gear. Race Director Willy Syndram had done a professional job organizin 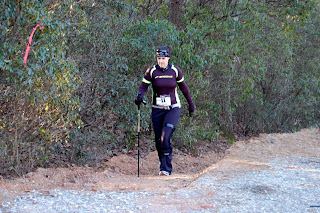 g the race and was using things you would normally see in a larger races, such as chip timing and a live video feed throughout the run. The large back porch and deck of the hostel had ample space for the well-stocked aid station and timing station, plus had a fire pit with a fire going all day and night.
Willy gave the runners a short briefing and then led everyone one loop around the course to make sure everyone was familiar with it. The course started at the back deck, looped around the hostel, past the chickens (who talked to you every time you went by) and down into the woods. The trail was wide enough for two people and was dirt/clay with three or four rocks or roots to worry about. The first part of the course in the woods consisted up switchbacks that, with the exception of two short, steep uphills, were gently rolling. After you popped out of the woods, you were at a powerline area (the Chasm of Despair), which consisted of a long steep drop and then a short, steep uphill. Then you were back at the hostel.

I'm assuming that the weather in the days leading up to the race was similar to the weather here in the NC mountains. We had had a lot of rain and then some snow and very cold temps. When the run started at 9:00, the ground was frozen. After about an hour, though, it started to thaw and turn into sloppy, slippery 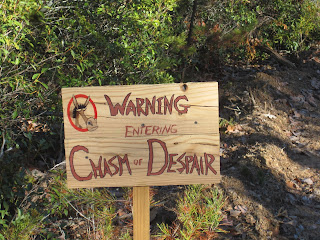 mud. It was at this point that I started to think about those two quotes. I hated to leave after only finishing a 5K, but I was starting to slip and slide and I really didn't want to become story #2.

Willy's marathon session of blowing leaves onto the trail to provide traction and me remembering that I had snow spikes in the car made me comfortable enough with the trail to stay. I had originally hoped for a 50K in about 10 hours, but it became apparent early on that with the mud, that wasn't going to happen. I stuck it out for 46 laps (my age) in 11 1/2 hours, which turned out to be 30 miles. Surprisingly, that was good enough for 3rd female and 6/14 runners in the 12 hour. Tony hung out with me for 18 miles of it and that made i 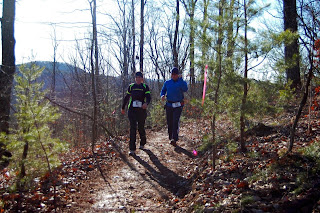 t extra nice. My longest hike thus far has been 18 miles in 6 hours, so this was a big jump. And it was my first ultra distance since June 2011.

It was great to be back in the ultra-world, although watching everyone else made me miss running. Hiking, however, is much more relaxing than running. I didn't eat, drink or sweat as much and my legs still felt good after 11 hours.

No knee issues, no brace issues. The rest of me feels like I've been hit by a truck, though.