I see I've had a couple year hiatus on writing, which just so happens to correspond to my two year bout with Tarsal Tunnel Syndrome.

A couple years ago, the arch of my left foot started to hurt when I ran.  It would take four or five miles to develop and downhills would really aggravate it.  I assumed I had injured it and maybe scar tissue had developed, but I also assumed it would get better.  I looked for shoes that would not put pressure on my arch and I continued to run.  Eventually it got to the point where the pain would radiate out of my arch, into my ankle and through my whole foot. The pain continued when I was not running.

Running was not fun anymore, so I finally told my doctor, who referred me to a podiatrist, who gave me a couple cortisone shots, which did not fix anything.  In the meantime, I researched everything I could research, tried every "cure" for whatever it might be and even cut holes in my shoes so they wouldn't aggravate my arch. By this point, the muscle in my arch was visibly enlarged.

During these last two years, my running dwindled.  I withdrew from Mount Mitchell.  I downsized Zion 100K to Zion 50K.  I did a 50K and went home at Black Mountain Monster.  I ran my own 100 mile adventure run, which I quit at 100K.  I withdrew from Georgia Jewel 100. I took a bad fall in my modified shoes, which gave me a nice scar and a bursa on my ACL repaired knee.  My last race was the Naturalist 50K, which was pretty painful. 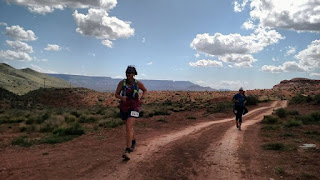 Finally, I asked for an MRI, which showed small tears deep inside the muscle and that the muscle was partially pulled away from the bone.  My podiatrist had not seen anything like that before and put me in a walking boot for six weeks, which I extended to eight because I could see that the muscle was shrinking some.

Optimistic, I started running back very slowly.  For a month, I did short walk-runs, and then for the next two months gradually built up to a long run of 12 miles.  But it still hurt. I went back to the doctor, who referred me to a foot and ankle surgeon.

On my first visit, after I explained my symptoms and the doctor examined my foot, he immediately suspected tarsal tunnel syndrome, which I had never heard of.  Tarsal Tunnel Syndrome is where the tibial nerve going into your foot is compressed as it goes through the tarsal tunnel, behind and below the ankle.  I was given a nerve study, which quickly confirmed the nerve was in fact compressed.  The only solution was surgery.  I could suck it up and keep running, but there was no telling at which point I would damage the nerve.

I told the doctor that I had planned to run a 100 at the end of September.  Would I still be able to do that?  He did some math and told me that if four months was enough time to train, then yes, I could.  (One December, Sarah Lowell had called and asked if I wanted to run 100 in two weeks.  I figured that if I could get ready in two weeks, surely four months would be great. Of course, I haven't really run much in the last eight months, or two years, for that matter, so we will see).

As I awaited the surgery date, I did what everyone should not do, and googled pictures of the surgery. (I was going to put one here, but you can just google it if you want.)  Which, of course, made me a bit anxious about what was about to happen and the possibility of me actually running again.  Which was further reinforced by reading horror stories of bad surgery experiences in which the writers wished they had never had the surgery because they were in constant pain. They struggled to walk normally.


In the end, the surgery went well.  They found that the fascia was wrapped really tight in there, and the nerves and blood vessels had formed little balloons from where they could not get through the tunnel.  The surgeon cut open the fascia to release the pressure, moved some tissue around and sewed me back up.

Recovery involved two weeks off work (they had wanted me to miss 6-8 weeks), crutches for about three weeks, then weaning to one crutch and then off.  I could do some upper body work and stationary bike with no resistance (that was pretty exciting). 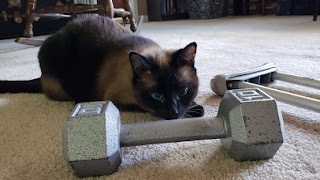 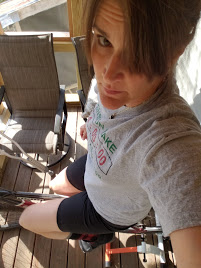 By my six week check up, I was walking around pretty normally and I was given the green light to start running. But use common sense. (The common sense part was delegated to my husband.)  They did say I wasn't going to mess up anything they did in surgery, so that was a bit of relief, and to expect to have pain for 6-9 months.

That visit was four weeks ago.  Last weekend, I ran 15 miles (slow with walk breaks) at the Black Mountain Monster.  My foot started hurting around 9 miles, so I changed shoes and did two more laps.  My foot told me at that point it was done running.  Later, though,  I walked three more miles.  My ankle swelled, but after a short walk the next day and an icing in the Nantahala River, it improved. I did a couple short, easy runs and now, a week later, it's back to where it was.

At this point, I've got a  new nasty scar and that whole area feels tight.  I don't know if the pain I get running is from the surgery or if I still have some issue. I'm assuming it's from the surgery, since they did find an issue and fix it. I'm currently in a hunt to find shoes that do not aggravate the scar.(Actually, UPS just showed up with another pair to try. Sorry for all the returns, Running Warehouse and Amazon.)

Mentally, I get really frustrated with my running, but I have to keep reminding myself that not only did I have the surgery, but I hadn't been running much since I was put in the boot eight months ago.  Patience.

Lung cancer often goes unnoticed in its early stages. As the disease develops, a persistent cough develop and chronic cough worsen. include chest pain, shortness of breath, hoarseness, bloody fluid coughed up from the respiratory tract, and frequent bouts of bronchitis or pneumonia. Sometimes the first was bone pain, headaches, dizziness,I was so piss off and tired of my life until i read about Dr Itua herbal medicine on blogspot i really thought it was scam when i first contacted him so little time i think about it and bought the herbal medicine which i took for three weeks and i was totally cured his treatment is so unique,I never thought i will be able to be free from Lung Cancer.But not only this Lung Cancer This great man can cure,Dr Itua also told me he can cure such diseases like... COLORECTAL CANCER, BLADDER CANCER, PROSTATE CANCER, KIDNEY CANCER, LUNG CANCER, SKIN CANCER,Glaucoma., Cataracts,Macular degeneration,Cardiovascular disease,Lung disease.Enlarged prostate,Osteoporosis.Alzheimer's disease,
Dementia. UTERINE CANCER, LEUKEMIA,HIV/AIDS,OVARIAN CANCER,BLOOD CANCER,MEN/WOMAN INFERTILITY,BURKITT LYMPHOMA - NON-HODGKIN.BRONNCHIAL TUMORS, BRAIN TUMORS,BILE DUCT CANCER,BONE CANCER,VAGINAL CANCER,HERPES VIRUS,LOVE SPELL,HEPATITIS,HE'S A GREAT HERBAL DOCTOR.HERE HIS CONTACT EMAIL::: drituaherbalcenter@gmail.com/. WHATSAPP:::+2348149277967

I am very happy to pass this to everyone that is sicking from any kind of disease that the solution to all diseases and sickness have arrive, i was just cured by Dr idahosa the great healer after i have been passing through stress all day and night. i never know i was going to be cured of this HIV sickness in my life cause they said there is no cure, i am proving all those that said that there is no cure wrong cause i have just been cured with herbal medicine of Dr idahosa the great healer, i cant talk cause my heart is full of excitement and i am using this medium of my testimony to inform you all to contact this man for any kind of sickness and he is ready to help you solve your problem. please if you are out there passing through any sickness kindly contact him here through his email address:{ dridahosasolutioncenter@gmail.com } whatssap number +2348134261542,  he  is waiting for you. once more i say a very big thank you for what you have done for me, i will keep my promise to keep sharing testimony about what God have use you to do in my life.
Dr Idahosa also cure listed diseases: